Russian forces in the Mediterranean - Wk45/2021

November 08, 2021
Task Force Composition
Weekly Brief
A small Russian task force of one frigate and one patrol vessel arrived in Algeria by the end of the week in order to take part in a joint naval training exercise. The exercise is expected to last by the end of next week.
Russian forces stationed at Tartus appear to experimenting with means on how to hide their vessels in port from commercial satellite images. Several smoke generators were observed turned on when a satellite passed overhead. The smoke however failed to spread out and hide the port. As such, the naval activity within the port remained clearly visible, only to be interrupted by small strokes of smoke. The majority of the task force however was at sea during the passage, leaving only one Improved Kilo class submarine and the Ropucha class LST RFS Tsezar Kunikov  in port.
Daily Events
November 07
Moma class intelligence collection vessel RFS Kildin was reported moored in the port of Oman. The vessel was photographed next to the Dutch frigate HNLMS Evertsen which is part of the UK carrier strike group. The photograph was dated November 01 [1].
The departure of the RFS Kildin from the Mediterranean was not reported. However, her small size and appearance make her look like a fishing trawler and as such, her passage through the Suez canal remained unnoticed.
Natya class minehunter RFS Vitse-Admiral Zakharyin passed the Bosporus and headed towards the Mediterranean [2].
Sorum class rescue tug MB-304 transited the Bosporus on her way towards the Mediterranean. The vessel was seen towing a Grachonok class counter-sabotage patrol craft, identified as the RFS Kadet [3].
November 10
Satellite imagery, provided by Maxar, showed the port of Tartus, Syria, at an unspecified date. Several smoke generators were seen laying a smoke curtain over the port. The smoke curtain however was not large enough to cover the entirety of the port and most structures and vessels remained visible [4].
Most Russian vessels were not observed in port with only one Improved Kilo class submarine and the Ropucha class LST RFS Tsezar Kunikov being present in port. The other vessels of the task force were at sea, three of them were allegedly spotted in a line ahead formation with each vessel trailing smoke in order to mask the vessels behind them.
The smoke laying operation was not reported by the Russian Ministry of Defense, suggesting that it was not an scheduled exercise and rather a deliberate test to see if the port of Tartus could be masked and prevent decent commercial satellite imagery being taken from the Russian vessels in port.
November 13
Two Russian warship, Grigorovich class frigate RFS Admiral Grigorovich and Bykov class patrol vessel RFS Dmitry Rogachev, together with rescue tug SB-742 have arrived at the port of Algiers. The Russian vessels will train together with the Algerian Navy until November 20th as part of the international exercise "Joint naval maneuvers - 2021" [5].
Mediterranean Weekly SITREP

Russian forces in the Mediterranean - Wk10/2021 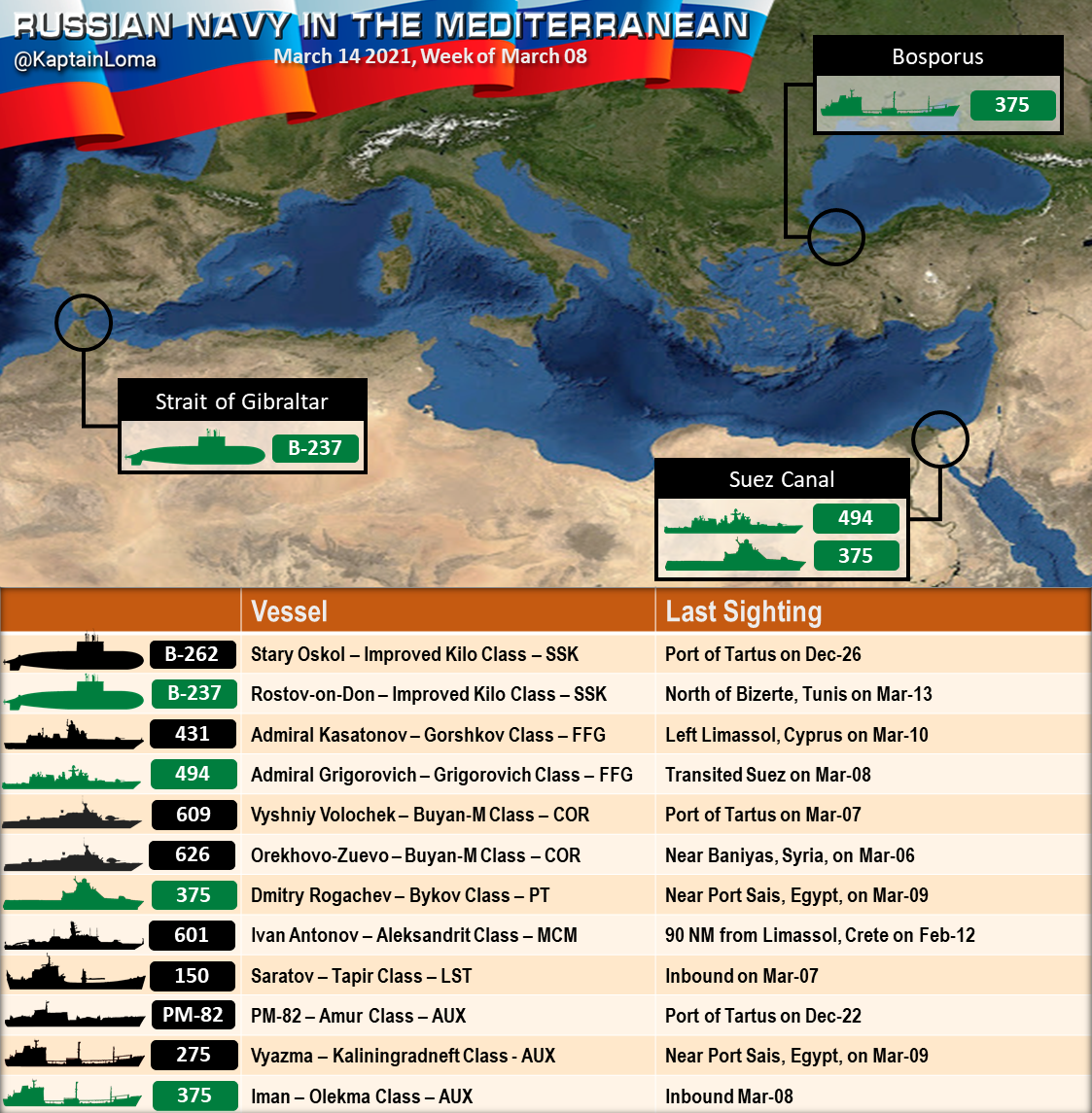 Task force composition As reported by OSINT on the morning of March 14 Weekly Brief Russian naval forces inside the Mediterranean have been substantially reinforced with the arrival of the Improved Kilo Class submarine RFS Rostov-on-Don on the afternoon of March 07 and the return of the frigate RFS Admiral Grigorovich and patrol vessel RFS Dmitri Rogachev from their Indian Ocean deployment. Another change in the task force composition is the arrival of the small tanker RFS Iman and the departure of the rescue tug SB-739. It is unusual for these rescue tugs to leave the Mediterranean without escorting a warship.  The fact that the patrol vessel RFS Dmitri Rogachev was refueling from the sea tanker RFS Vyazma the day after it passed through the Suez Canal, rather than from the SB-739, might suggest that SB-739 has encountered mechanical problems which prevents her from supporting warships. RFS Iman could thus be deployed to the Mediterranean to take over the escorting duties of SB-739. W
Read more 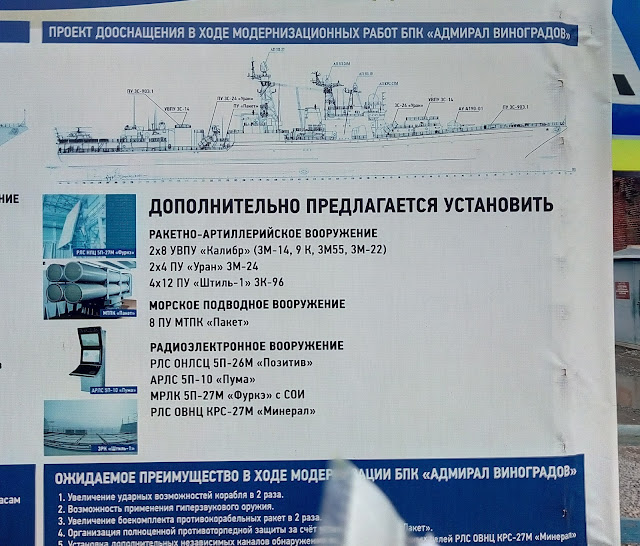 Udaloy class destroyers, together with the Slava and Kirov class cruisers and the aircraft carrier Admiral Kuznetsov, form the blue water navy component of the Russian Navy. Their large displacement makes them more suitable to operate in the rougher conditions of the words oceans than frigates and corvettes. While the Admiral Gorshkov class frigates have demonstrated their capabilities of operating on the high seas, most notably during the circumnavigation by the lead ship, the RFS Admiral Gorshkov, the larger tonnage of the Udaloy class means that destroyers are more stable platforms. The modernization of the Russian surface fleet is characterized by two different types of programs. On the one side their is the massive build up of corvettes and frigates to replace the aging vessels in use by the Russian Navy. On the other side there is the modernization of larger surface combatants such as the Slave class cruisers, the Kirov class nuclear cruiser RFS Admiral Nakhimov, the aircraft car
Read more

Russian forces in the Mediterranean - Wk14/2021 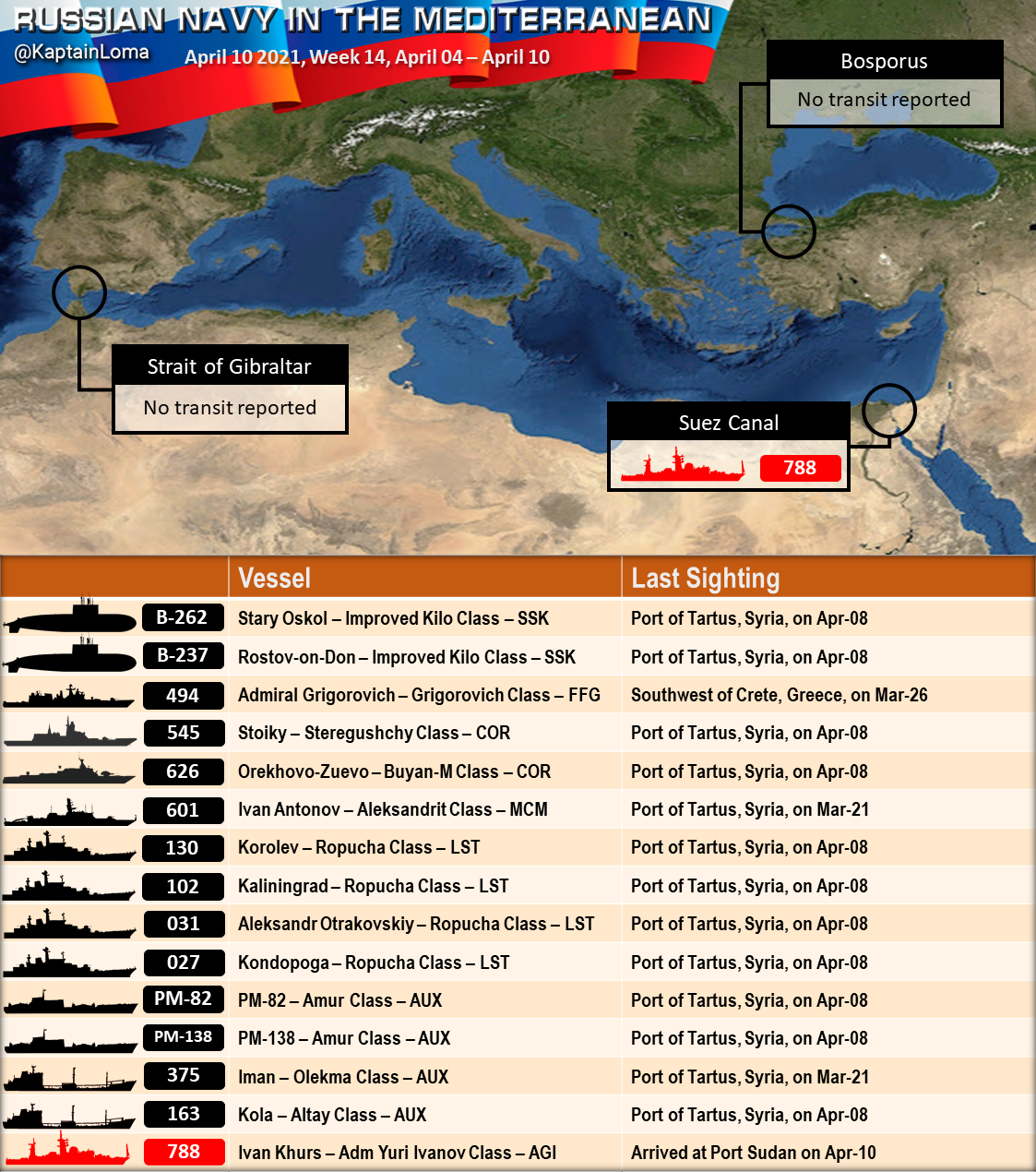 Task Force Composition As reported by OSINT at noon of April 10 Weekly Brief No naval activity was reported through OSINT this week and it appears the Russian naval forces were largely concentrated at Tartus, Syria where the bulk of the task force was spotted on April 08.  Several vessel are scheduled to leave the task force in the short term. These include the Steregushchy class corvette RFS Stoiky and her escorting fleet oiler RFS Kola. Both vessels have completed their Indian Ocean deployment. Repair vessel PM-82 is also expected to return to the Baltic Fleet as the PM-138 is able to take over her task of providing technical support for the Russian vessels stationed at Tartus. Four Ropucha class landing ships were located at Tartus on April 08. The Baltic Fleet vessels were previously observed entering the Mediterranean on March 25. The two vessels of the Northern Fleet entered on March 28 but weather conditions at the time prevented a positive identification and only one vessels wa
Read more