Russian forces in the Mediterranean - Wk47/2022 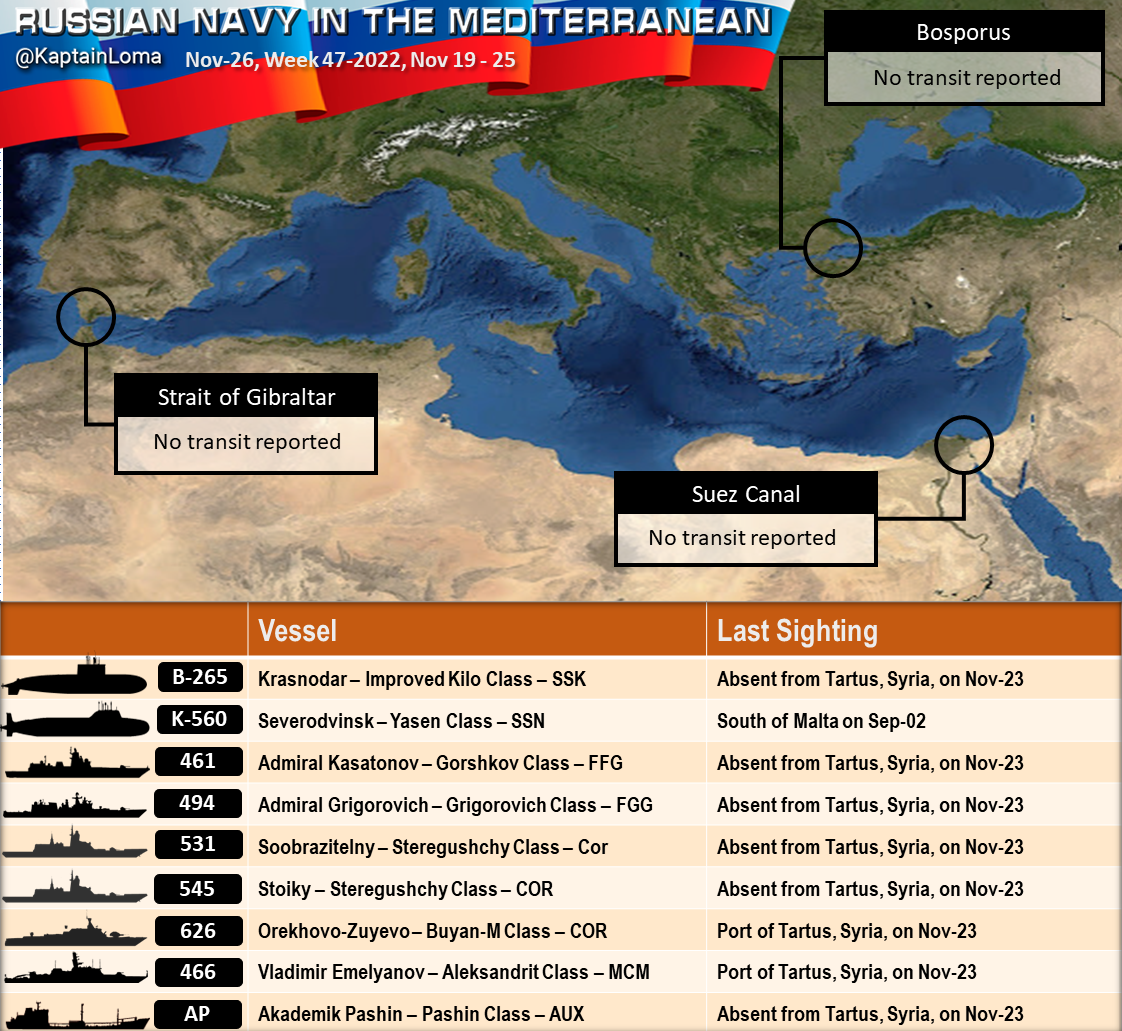 Task Force Composition As reported by OSINT at the morning of Nov-26 Weekly Brief The majority of the task force was not observed in port during on November 23rd. The absence of the task force from Tartus coincided with the ongoing French aircraft carrier deployment in the eastern Mediterranean as part of the French military mission Antares Daily Events November 23 Satellite imagery of the port of Tartus revealed only the Buyan-M class corvette Orekhovo Zuevo and Aleksandrit class minehunter Vladimir Emelyanov as being present in port. The remaining vessels of the task force were not observed [ 1 ].
Read more

Russian forces in the Mediterranean - Wk46/2022 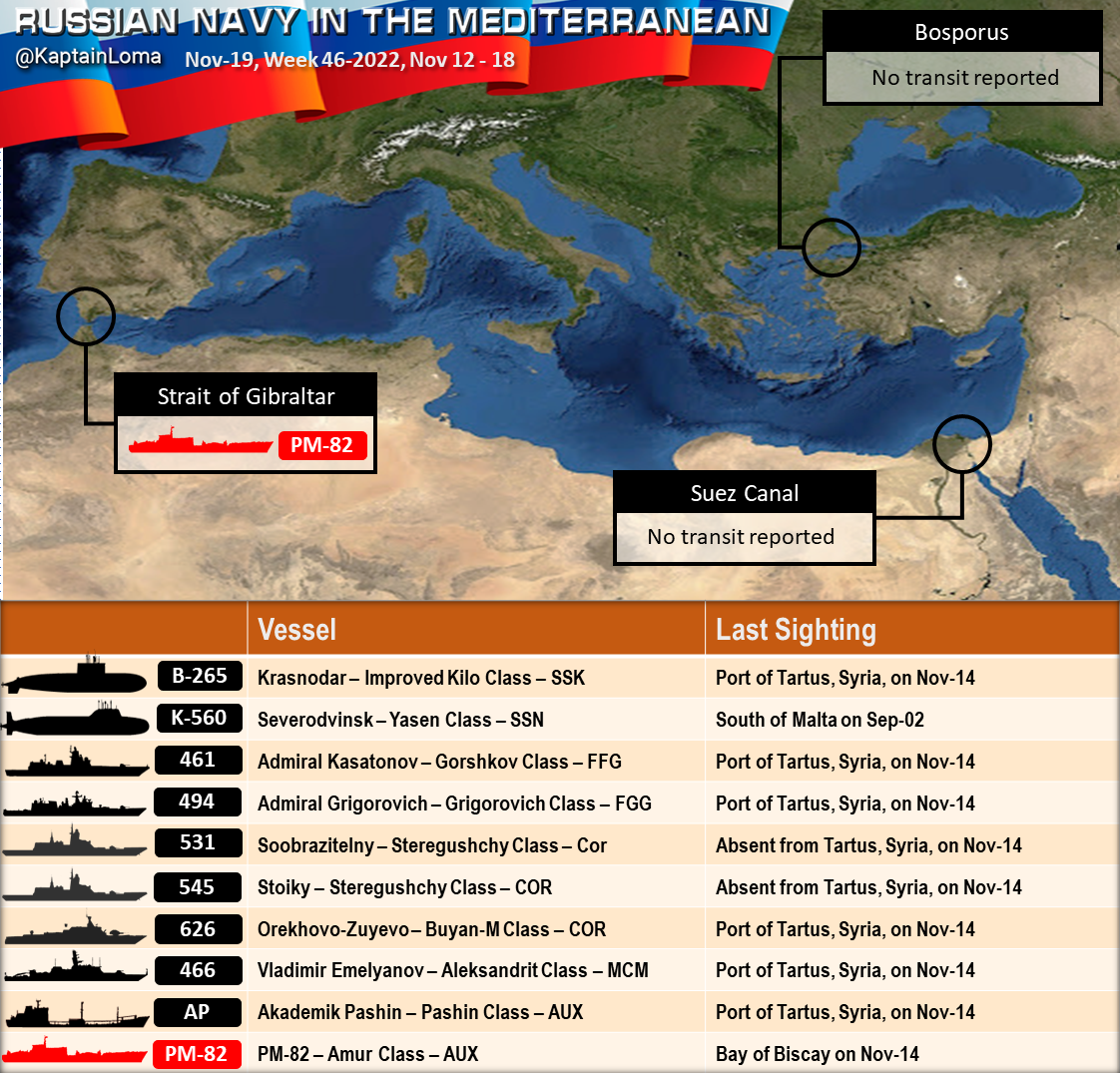 Task Force Composition As reported by OSINT at the morning of Nov-19 Weekly Brief The Russian task force is currently operating without a dedicated repair vessel to sustain long distance and duration deployments as the Amur class repair vessel PM-82 departed the region. Passage through the Strait of Gibraltar was not observed and the vessels was only spotted again once it was already in the Bay of Biscay.  In the past, an Amur class repair vessel of the Black Sea would take over the role of support ship in the Mediterranean however, the closure of the Turkish Straits prevents the Black Sea from sending warships to the Mediterranean. Most vessels were confined to port at the beginning of the week, with the exception of both Steregushchy class corvettes which were absent from Tartus on November 14. Daily Events November 14 Amur class repair vessel PM-82 has been reported in the Bay of Biskay making a northbound transit. The vessel is most likely heading back towards its home base at Balt
Read more

Russian forces in the Mediterranean - Wk45/2022 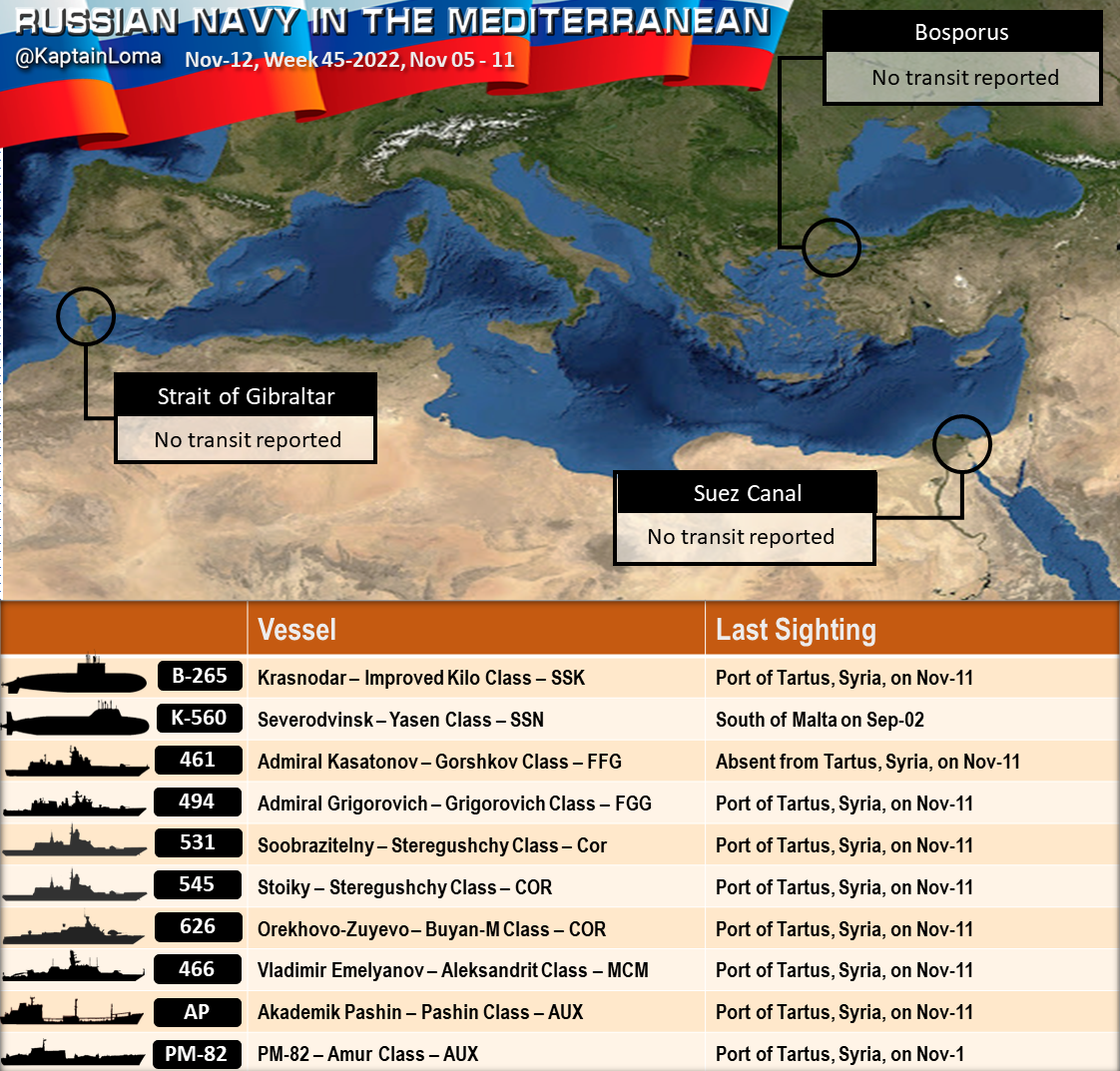 Task Force Composition As reported by OSINT at the morning of Nov-12 Weekly Brief Based on their absence at Tartus, it appears that both Baltic Fleet Steregushchy class corvettes conducted a patrol in the Eastern Mediterranean, most likely in response to NATO movements in the same area. The remainder of the task force however appears to have remained in port for the duration of the week. Either Russia is running low on supplies to sustain the task force or ships are being kept in port to reduce the risk of mechanical breakdowns.  The vessels assigned to the Black Sea can not cross the Turkish Straits and are thus cut off from their home bases in case larger repairs are needed. Daily Events November 08 Satellite imagery of the port of Tartus showed several Russian warships being moored inside the harbor. The vessels were identified as Grigorovich class frigate Admiral Grigorovich, Buyan-M class corvette Orekhovo-Zuevo, Aleksandrit class minehunter Vladimir Emelyanov, Improved Kilo class
Read more

Russian forces in the Mediterranean - Wk44/2022 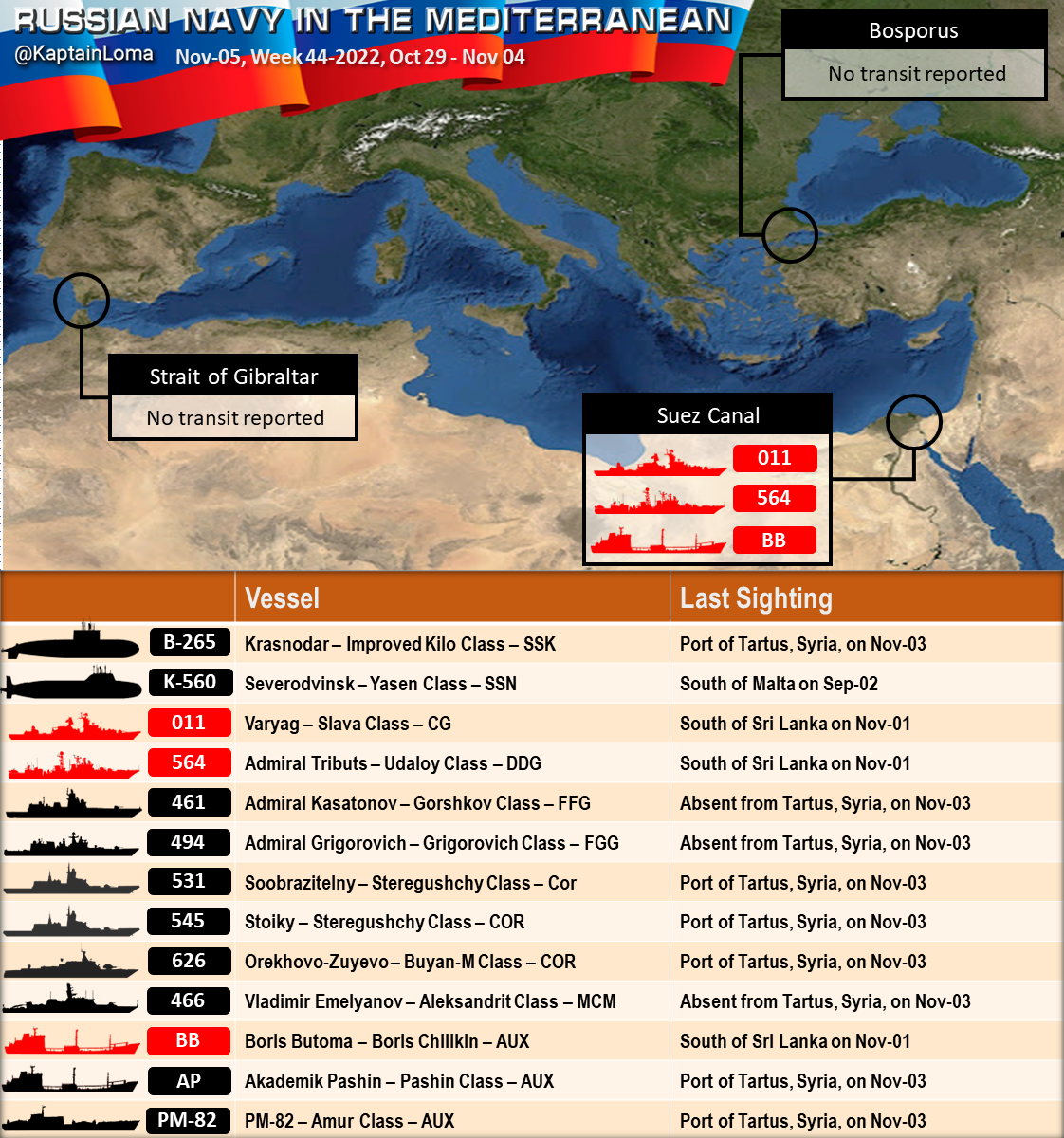 Task Force Composition As reported by OSINT at the morning of Nov-05 Weekly Brief The increased combat readiness of the Mediterranean Task Force has officially ended. The Pacific Fleet warship were reported sailing south of Sri Lanka on November 1st and heading back towards their home port of Vladivostok. Given the transit time needed between Tartus and Sri Lanka, these vessels already departed halfway Week 43 at the latest. Their passage through the Suez Canal was not reported by OSINT, due in part because their escorting tanker, Boris Butoma, did not transmit an AIS signal. The remaining vessels of the task force remain confined inside the port of Tartus with the exception of the Grigorovich class frigate Admiral Grigorovich and Gorshkov class frigate Admiral Kasatonov. These vessels most likely are at sea keeping track of the the US Navy aircraft carrier group centered on the USS George H Bush. Daily Events October 31 Satellite imagery of the port of Tartus showed several Russian wa
Read more

Russian forces in the Mediterranean - Wk43/2022 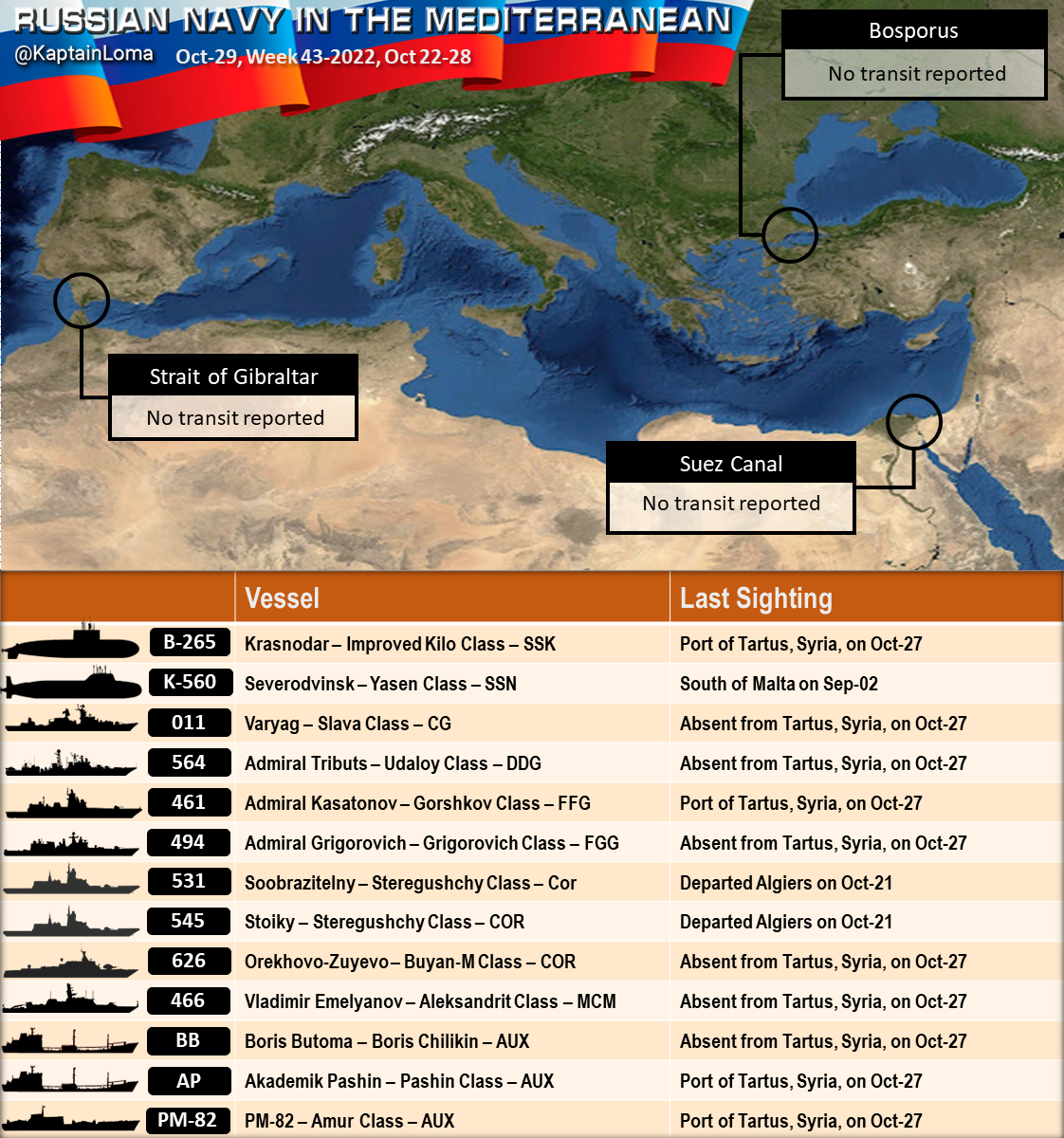 Task Force Composition As reported by OSINT at the morning of Oct-29 Weekly Brief Satellite observations of the port of Tartus at the beginning and ending of the week revealed that the vast majority of the vessels were at sea with only a limited number of warships and supporting vessels being reported at sea. The pressence of the US Navy aircraft carrier USS George Bush near Crete could have prompted the task force to sail out in an move of deterence. Daily Events October 22 Satellite imagery of the Port of Tartus showed the majority of the task force being out of the harbor and anchorage sites. The only vessels remaining inside the port were Improved Kilo class submarine Krasnodar, Buyan-M class corvette Orekhovo-Zuyevo and Amur class repair vessel PM-82 [ 1 ]. October 23 Fleet oiler Akademik Pashin was observed on satellite imagery at 85 nautical miles south of Pafos, Cyprus. The vessel is on an eastern heading towards the Syrian port of Tartus. No additional vessels were observed in
Read more

Russian forces in the Mediterranean - Wk42/2022 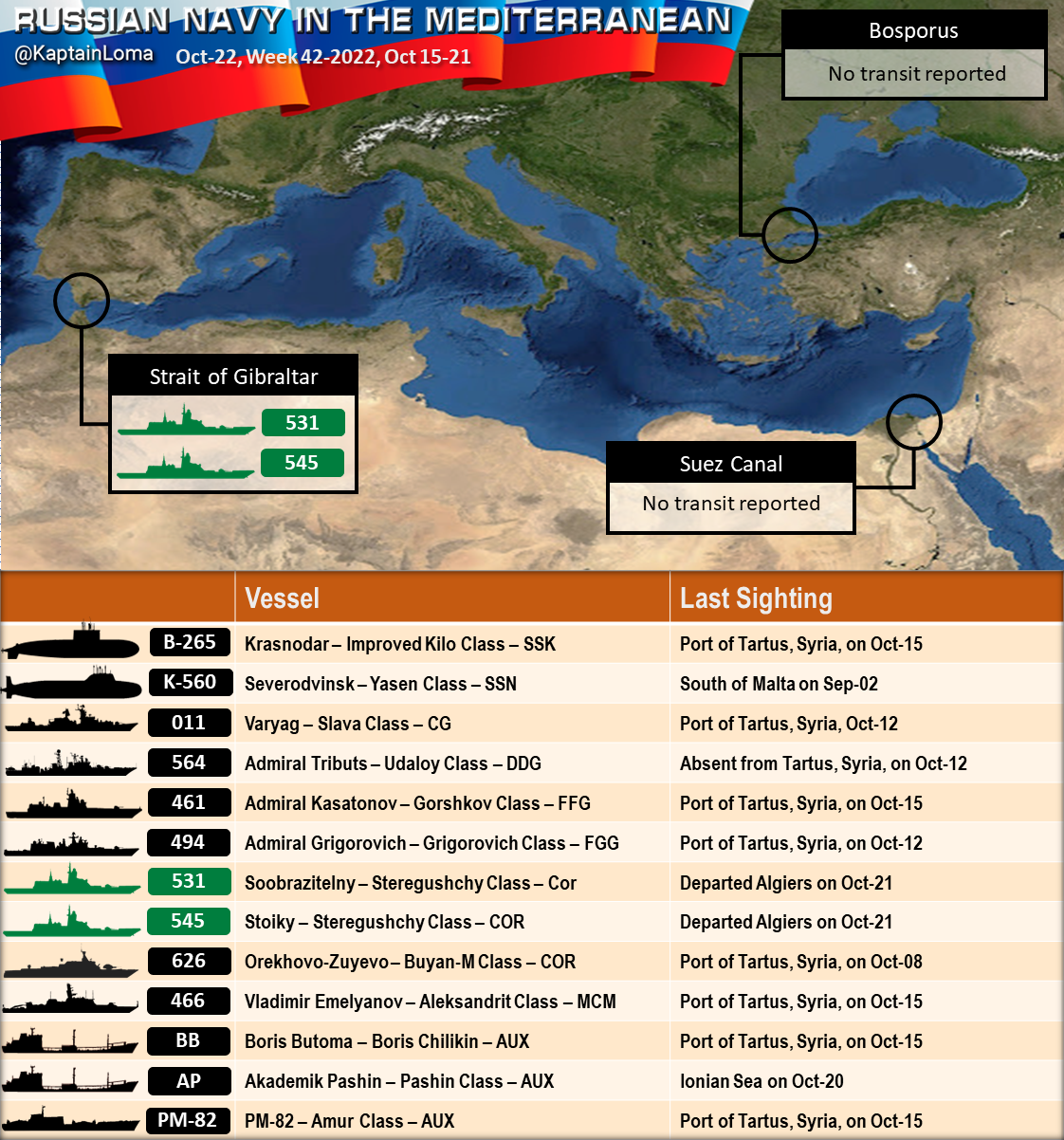 Task Force Composition As reported by OSINT at the morning of Oct-22 Weekly Brief The arrival of the two Baltic Fleet Steregushchy class corvettes Stoiky and the Soobrazitelny in the Mediterranean make for a temporary strengthening of the task force. It is however now very likely that the detachment of the Pacific Fleet will leave the Mediterranean in the coming period if the statements made the Commander in Chief for the Russian Navy, Admiral Nikolay Evmenov, on October 19th are true. Roll-on, Roll-off cargo vessel "Sparta-II" was observed heading out of the Mediterranean this week [ a ]. The vessel is suspected of heading towards Baltiysk, Kaliningrad, to pick up additional weapon systems and deliver them to the Russian forces in Ukraine. Earlier, Sparta-II transported Russian S-300 air defense systems from Syria back towards Russia. Daily Events October 15 Satellite imagery of the Syrian port of Tartus showed several Russian warships moored inside the port. These vessels w
Read more

Russian forces in the Mediterranean - Wk41/2022 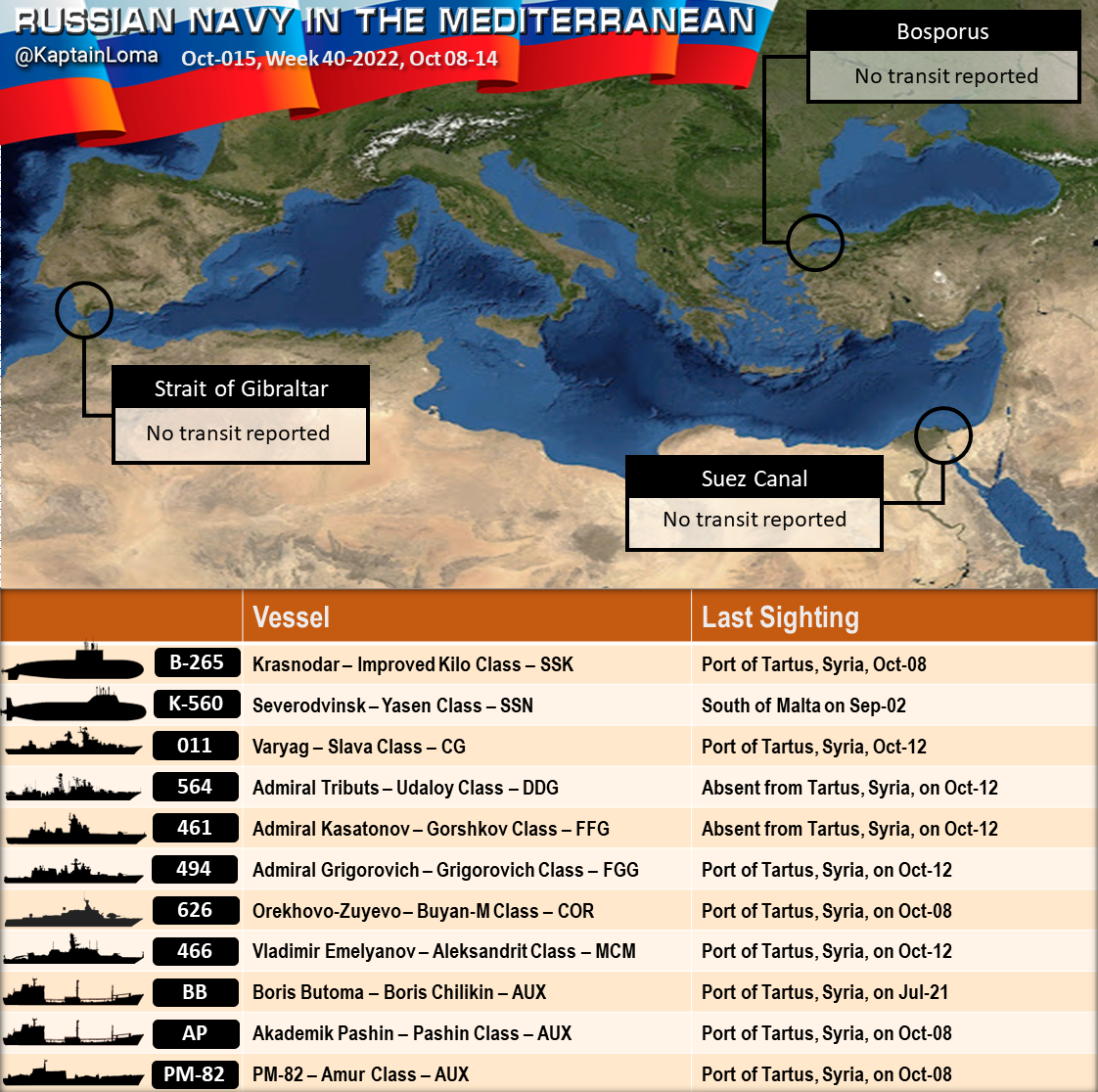